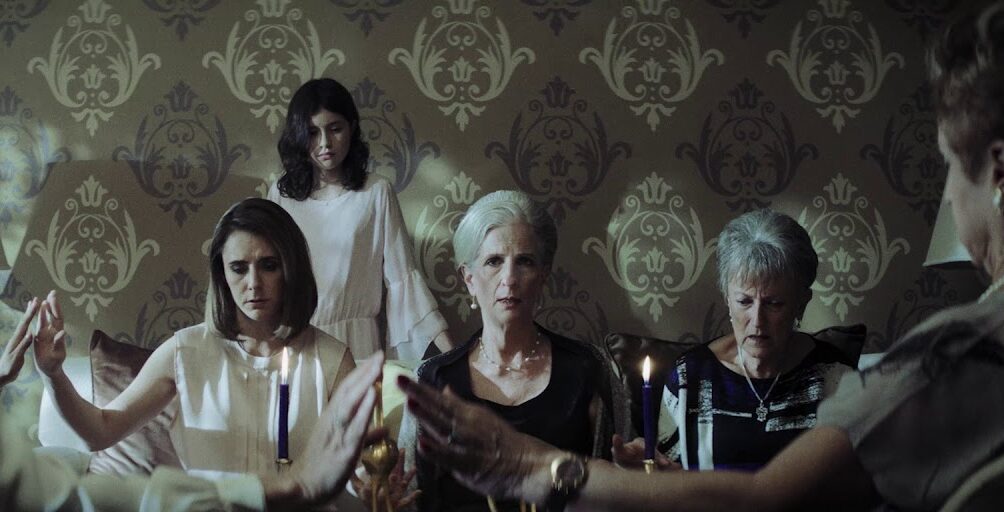 Director Bustamante’s analogue is Coppola, both surfacing what is vacuous through crimson screen presence.

One of the most engaging exhibitions of classical competence in a filmmaker this decade, La Llorona gorgeously composes in chords, holding shots like a piano pedal pressed, moving another sequence as a lingering.

Not to be confused with The Curse of La Llorona from the Conjur-verse, director and writer Jayro Bustamante’s La Llorona finds genocidal Guatemalan general Enrique Monteverde (Julio Diaz) answering for his crimes in a highly publicized trial. Heightened burdens of proof keep him out of jail, but an official case dismissal does little to assuage crowds affected directly or roused by the dictator’s unabashed criminality. Protests stalwart, a haunting begins to invade the General’s house, too.

Bustamante and co-writer Lisandro Sanchez never ask us to summon sympathy for the general’s wife, played by a reaper-white Margarita Kénefic — though daughter Natalia (Sabrina De La Hoz) and granddaughter Sara (Ayla-Elea Hurtado) fare somewhat better. Haunting bumps in the nights perplex and concern the family, the General in particular, and give way to days of megaphones just outside the bathroom window, protest chants accented by drums one roof away from the family’s decadent, oasis of a backyard, ready for morning yoga. Housekeeper Alma (María Mercedes Coroy) arrives in the chaos to try to replace a fleet of conscientious-objector house staff and, alongside head housekeeper Valeriana (María Telón), make sense of the disorder.

La Llorona’s themes of the lasting imperialism of Spain read like the French-colonist sequence from the Apocalypse Now Redux, polite dinner and white napkins adjacent to war.

Bustamante and cinematographer Nicolás Wong surround the screen with palettes and angles the envy of Coppola. Playing with doors and drawn guns, Bustamante alludes to The Godfather films early, a tax. Both Coppola’s tale and Bustamente’s here chronicle the loneliness of powerful criminal families, not in admiration, but nevertheless in awe at the twisted vacuum threaded among the characters. Each director surfaces what is cursed inside the characters with crimson screen presence and chills.

Impressively and intangibly, very little of La Llorona‘s aesthetic comes close to elbows on the piano — faults leveled against equally as ambitious but showy contemporaries like Refn. Bustamante and Wong make even the more hallowed silhouettes from Skyfall director Sam Mendes, or the sci-fi gray of Denis Villeneuve’’s Arrival look careless and undercooked by comparison.

Dialogue is the movie’s weak point, perhaps too spare, but would you call Queen’s bass lines “underdeveloped” when Freddy Mercury is singing? Or lament the paper strength of a page in a Cormac McCarthy book?

The movie would work sound-free; it’s visual storytelling at its finest, and whatever delivery system the filmmakers want to unfold and give dimension, let it be.