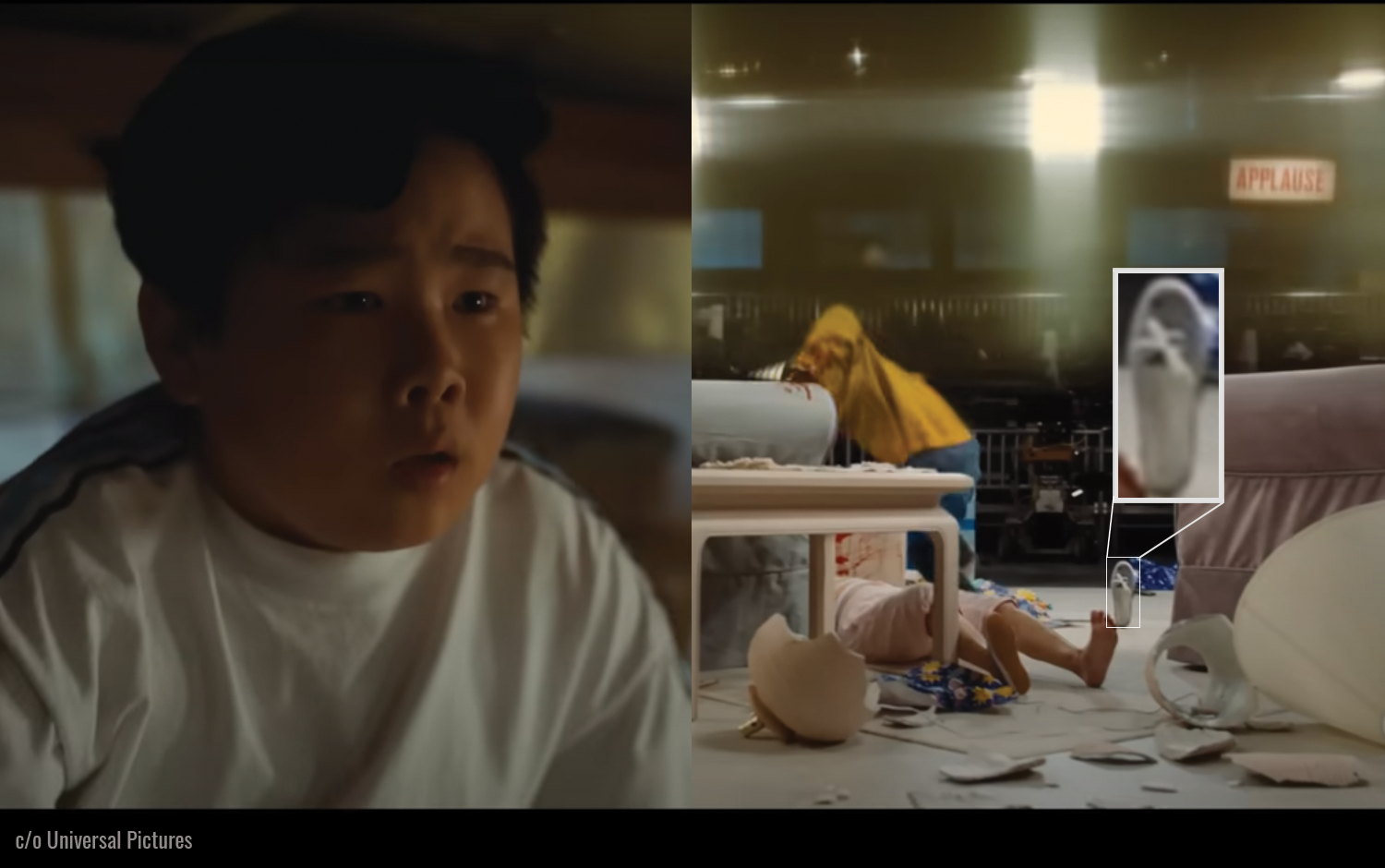 Peele is no stranger to symbols, so this one might as well be an invitation to unpack.

Nope, Jordan Peele’s third and most spectacular horror film, is on pace to become the next big blockbuster of the summer, earning an estimated $48 million to 63 million in its opening weekend.

Five years after Get Out, and three after Us, the celebrated writer-director enjoys more than enough clout to warrant the price of admission. Peele recently scoffed at the idea that he might already be the greatest horror director of all time, ceding the honor to John Carpenter. But while Carpenter’s best films like Halloween (1978) and The Thing (1982) thrive in the simple joys of terror incrementally made visible, Peele’s thrive in relentless social subversion. Peele doesn’t want us to walk away knowing more; he wants us to run away, dragging questions behind us.

Nope is no exception. The camera work is intense and piercing enough to feel voyeuristic, but the lens’ fixation with certain objects, and the oddities within the costume and set designs, are a z-axis to the screen.

The main plot progresses with what for a Jordan Peele movie is a surprisingly shallow and single-pointed conflict: aliens show, and a down-on-their-luck family resolves to secure proof and get rich. The characters are all resourceful and find ways to contribute collaboratively to make the goal a reality. They cope with the danger according to type: Emily ‘Em’ Haywood (Keke Palmer) cracks jokes and schmoozes; her brother OJ (Daniel Kaluyahh) intellectualizes practically; prying, local electronics guy Angel Torres (Brandon Perea) elbows his way in and runs point on all tech.

And then there was a shoe.

In the B story, former child star Jupe Park (Stephen Yeun) leverages his celebrity to run a tourist-trap ranch. A plastic smile in tow, he smooths over a past that ended in tragedy: in the 90s, an acting ape savaged its sitcom set and killed all of the actors except for Jupe. Near the bodies, impossibly, stood a shoe on its heel. Park spies it, and ultimately keeps it. In present day, he displays it in a hidden “Hollywooden” shrine next to more positive mementos from his show.

Excluding the alien, which the characters learn is biological, the mystical qualities of the shoe don’t have any equal in the movie. There’s no talk of mischievous spirits or quantum irregularities. There’s no mention of Native American burial grounds or a miscast spell. Given what parallels to the shoe do exist, it’s more likely the shoe is strictly symbolic than that it signals a hidden plot point.

The shoe has on it a single, circular blood stain, off-center near the toe. Undripping, it marks one of several persisting circular images throughout the movie.

It’s a gravitational anomaly that transcends what’s senseless, and from it, seems to offer the initiated something remarkable, purposed, and continuous.

The standing sneaker otherwise presents as pristine — it’s a clean, white build indicative of both means and conformity. Peele’s on record about embedding within his movies symbolism for the saccharine, faux-purity of some cultural whiteness. In Get Out, the Allison Williams’ character Rose, dressed in a white shirt and khakis, eats Froot Loops dry and delicately sips milk through a straw. Peele pointed out that the behavior’s psychopathic even before you consider that, in the scene, she’s searching for Black men to abduct.

Nope‘s circles, the more dominant imagery here than color, quickly come to represent incoming predation. The saucer we learn is a creature, and its oblong abduction bay, a mouth. The thing is consuming, stealing sustenance.

A dubious, relentless reporter appears at an inopportune moment, springing cameras and hiding behind a mirrored helmet with an odd, singular hole — off-center and circular — in a spot that makes sense neither for an eye nor a mouth. He meets Em’s pleas for him to leave with sarcasm and chooses to push on, to capture the creature’s next feeding for his readers. He becomes the feeding.

Peele later in the film floats the creature as it unfolds in an off-center shot, a blatant asymmetry that will make cinematographers itch. We see that feeding routes through an esophagus more hall than tunnel, and with a square fascia, contrasts the smooth radii of earlier imagery: The path up is sharp and angular, even if entrancing at first.

Nope muses explicitly on Hollywood and the nonwhite experience limited within it and without it — this, of course, in spite of the Black American origins in the first, actual “motion” picture that the trailer and film showcase. Threads upon threads: Alissa Wilkinson at Vox points out that the credited character name for the doomed reporter is “Ryder Muybridge,” a nod to Eadweard Muybridge [sic], the director of that very first, motion footage. Like the creature, a Hollywood-consuming audience ultimately is more biology than machinery, part of something animalistic within all of us that, absent the catharsis of pure primate id, finds other ways to chew and spit.

The shoe, bloodied with a dollop, is an extraordinary Rosebud for Jupe. It’s a gravitational anomaly that transcends what’s senseless, and from it, seems to offer the initiated something remarkable, purposed, and continuous. The close-up of Jupe as a child (Jacob Kim) staring at the balancing shoe mirrors the same at his ranch, where, agape, he stares at the sky. The wild-west-inspired jacket Jupe dons for the occasion, just as a megachurch pastor might sport, has a studded illustration on its back — one of a UAP. As if at an altar, the obsessed man feeds the beast, assuming it’s an entity with which he can “enter into an agreement”: sacrifice a horse, every night, same time, controlled appeasement. It defects on Jupe and eats his crowd.

Peele dedicates a great deal of screentime to people attempting to tame literal animals, and to conversations about the practice. Shoe recently in frame, we watch as the ape kills a man who commands him to “sit!” Jupe’s three kids dress up with alien suits, but with ape bodies, a trivializing that characters like the self-serious OJ resist. In Jupe’s children, he’s anthropomorphized some of the very nonchalance and unwieldy obsession that ruined his own childhood. Lauding it all, the idea that he’s stumbled upon something special in the UAP is alluring to him in the same way the preternatural shoe was. They each organize what’s wild and position witnesses like him as worthy.

Like a witch’s Dewey Decimal number, the shoe’s labeled: a zeitgeist marks its prey and proceeds to incant and chase.

Exceptional filmmaking echoes exceptional filmmakers. The monologuing in Jupe’s opening scene, which Yeun delivers with Tarantino-like camp, even reads a bit like Nicholson’s job interview at the Overlook Hotel in Kubrick’s The Shining (1980); at distance across a desk, we learn fables and establish the drunken delusions within them.

Not unlike Coppola’s infamous food shots in The Godfather (1972), which signal when violence is near, Peele’s off-center shapes flag out-of-control situations, like fame, that, though they buck, fools believe they can wrangle into place. Looking at the object only makes the system salivate and beckon more. Surviving requires discipline, to avoid becoming a meal in those moments. Peele makes his rules as literal as Jamie Kennedy’s countdown in Scream (1996). For Peele, don’t gawk, and don’t tempt.

Independent of what the director did or didn’t mean to signify, the shoe mystifies and enchants us because it stands when the rest sit. It conquers gravity and elevates into a display case of glass, shining while the rest of its ilk tread dirt. The ascension is with mark. Like a witch’s Dewey Decimal number, the shoe’s labeled: a zeitgeist marks its prey and proceeds to incant and chase.

Allegories for paparazzi and toxic fandom are not new. The Darwinian stakes in Nope are pure though, again, the plot zeroing in on one bait-and-switch scheme with a blink-and-you-miss-it epilogue.

Angel runs exposition early in the second act, explaining that an ambiguous “they” have renamed UFOs as “UAPs.” He references the famous New York Times piece that afforded legitimacy to the foil. In comic, paranoid relief, he reasons that the name change is another cover-up, designed to confuse. “UAP,” which stands for “Unidentified Aerial Phenomenon,” is a term that’s more inclusive, not less. When we look at military footage of flying, pill-like objects, do we really know that they aren’t biological? If they use atypical propulsion or only appear to us to travel, is it possible that they’re not really “flying” at all?

Peele’s films continue to remind us that we are sick with our own certainty. We don’t know ourselves. We don’t know others. Worse, it’s when we think we’re special and uniquely knowing that we endure the greatest consequences — he’s writing classical tragedies.

Within the nihilism are laughs, and the stakes of the characters are not ours as we exit the theater and engage our own conflicts again. But we are all rooted in the same organism. The nuclei, off-center, we rarely if ever penetrate — and pretending you have might just land you in an alien throat next to a plastic horse.