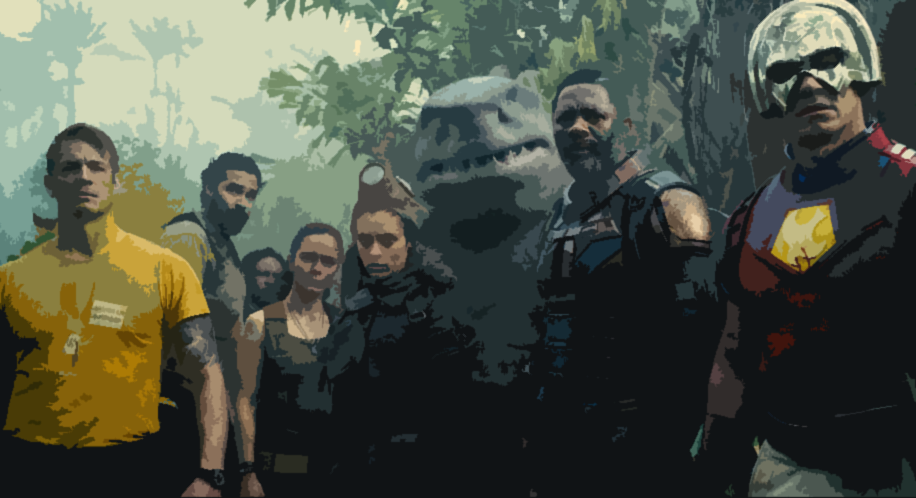 HBO Max’s The Suicide Squad is only about half as good as advertised, which is to say it is not the Second Coming. The film can be summed up in a single Killer Shark line: “New, dumb friends.” There’s nothing really wrong with new, dumb friends — after all, they are friends — but how many do you really need?

In media res, we find most of the surviving gang from David Ayer’s first Suicide Squad (2016) back with a few new additions, mostly criminals serving, for reduced sentences, the American intelligence Queen Amanda Waller, played by the often brilliant Viola Davis. Add in a secret mission, stake the whole world’s existence, and presto: we have a movie by yesterday’s standards.

I liked The Suicide Squad seven years ago when the same director called it Guardians of the Galaxy. Did we really need an R-rated version? Ayer’s take got obliterated supposedly for being an uncreative Guardians rip-off. Studio-straddling director James Gunn’s version will receive no such complaint, it seems. (Is it possible to rip off yourself?)

Margot Robbie and her wild work as Harley Quinn go almost completely wasted narratively, despite having a respectable composite of luminous scenes, cinematography-porn. One of the world’s most independent and fearless female characters learns how to be independent, and fearless.

Cheeky soldiers Joel Kinnaman’s Rick Flag and Idris Elba’s Bloodsport exist in, sadly, an equally nebulous story-limbo between pre-2020 consciousness and post-, itching to mean something at once nihilistically profound and tongue-in-cheek, but ultimately meaning neither, occupying silliness instead.

John Cena’s Peacemaker is an arresting Captain America on steroids, Waller’s good boy. He holds his own opposite sharpshooter Elba. David Dastmalchia reprises his throwaway Dark Knight character’s shaking neuroticism as Polka-dot Man, who vomits rainbow polka dots. His is one of the genuinely weirder and therefore more engaging screen presences, here. Then there’s Sylvester Stallone, uselessly cast in a voice-acting position, for Killer Shark, which far more talented actors or comedians than he deserved to pilot, no doubt.

Newcomer Daniela Melchior flexes as “Ratcatcher 2” and single-handedly provides the faint heartbeat for the story. During a bus ride into battle, she’s able to conjure a hypnotizing monologue that feels like it’s pulled from a different, better movie.

The narrative motions in The Suicide Squad are almost all binary, forward or backward in the action — few characters have the opportunity to mourn a lost pound of flesh. Gunn called this his “war” movie. In its eye-popping viscera, sure. In its unimpressive sentimentality, hardly. He also described the film as a misfit, ensemble caper, a comedy, yet brand classics like Kelly’s Heroes (1970) boast more charm by trying less. Even six or seven strong performances cannot will a story into quality. Every scene, here, feels tediously gnawed to wring flavor ad infinitum, no matter how used.

Short of some new memes — of which, we have a surplus — The Suicide Squad adds approximately nothing, to any conversation right now, about anything. Did we really need to witness the same trite themes of government cover-ups and the pleasant surprise of unlikely friendships as, I don’t know, anywhere between 1,000 and 100,000 other movies? Or how about one on how heroes are actually “villainous”, in their own way? Amnesiatic, critics have loudly lauded the thing as though it’s an altogether new rebuke to Marvel superhero worship. They somehow simultaneously ignore Prime’s entire, very recent series The Boys and, more impressively, every single Batman story, print or reel, for over half a century.

There are excellent sequences, here, that do remind us Gunn still has a sharp eye for action, especially. An overtaking of a military camp mostly by Cena and Elba in a tit-for-tat competition is an early joy never quite matched. Gunn frames Robbie extraordinarily well, catching her alchemy particularly when she wields a doubly-sharp spear and a few lifted guns. And a sibling-rivalry kind of fistfight between Kinnaman and Cena is what the Street Fighter (1994) lack-of-action sequences should have looked like — I couldn’t help but picture Kinnaman as Guile.

There’s nothing really wrong with what’s in between the stand-outs, except that James Gunn, supposedly everyone’s favorite weirdo, does nothing that weird. Plucking these characters from DC canon, Gunn doesn’t seem to know whether the story in The Suicide Squad exists to set up the jokes, or the jokes exist to set up the story. To the movie’s credit, it earns a few genuine belly laughs that will no doubt be mistaken for guffaw greatness, but as that inevitable climactic fight in the final act troddingly approached, I found myself genuinely considering turning the movie off — a perk of these effortless, same-day premieres the pandemic has now normalized. The prospect of more Harley Quinn mania, some kind of novel hyperviolent and hyperempathic perspective, static or not, is all that kept me tapped in. Predictably, the film continued to devolve, culminating in progressively more contrived content, including an ostensible Ghostbusters (1984) and Godzilla homage that in its art design is actually outright plagiarism of Rick and Morty‘s facehugger satire “Promortyus.”

None of this is to welcome only less twisted movies in the wake. No, give us the opposite. Roast us in unique, misanthropic ways. Last year yielded us new kinds of gold like the disturbing detective noir The Empty Man, and dark comedies like Palm Springs and the ensemble fun of Vampires vs. the Bronx, both of which paid homage while introducing new riots. And The Empty Man is a cautionary horror tale on mindfulness — how’s that for something new?

Yet here we’ve all gathered, instead, to watch and participate in this veritable HBO and WB cultural event, DC having exhumed Gunn from the cancel culture compost pile. Aside from playing the part of Gunn’s zombified repurposing and introducing some wallpaper-ready cinematography, The Suicide Squad is an almost useless movie, sautéed uniquely for the fat. I wish it were saccharine, or salty, or undercooked. Anything, anything other than this titanic, overlong, leftover heap served to me as filet. Politely, no, thank you. I’ve had my fill for now, and with Guardians Vol. 3 on its way — and Guardians Vol. 2 thankfully long, if laboriously digested — I’m going to go recover, now.