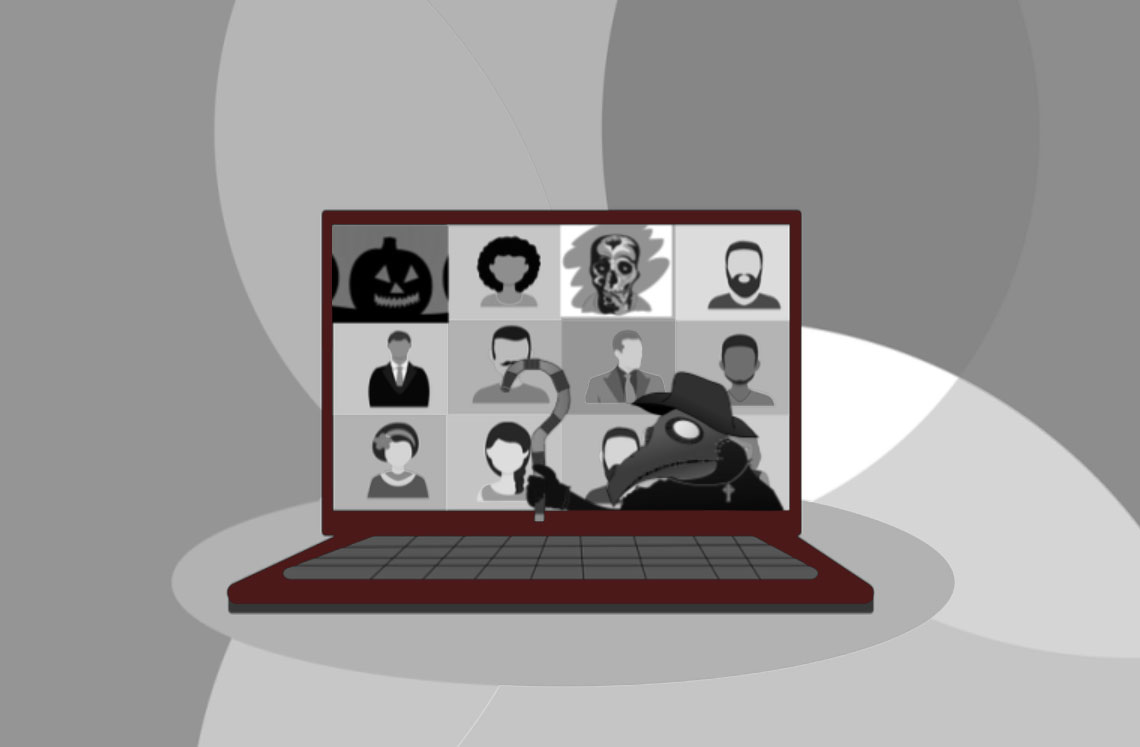 Meeting notes: these movies, not bad.

What could be more terrifying than a breakout room? How many different ways can someone find to not share their screen? Most importantly, how much trash can you talk in chat before you accidentally send to “all”? Found-footage as a vessel for horror never quite devolved into the wandering sprite we expected. Instead, the sub-genre found clever ways of pushing its boundaries. In one mutation, the Zoom horror movie, found-footage expanded its palette to chats and anything else that can appear on a video screen: YouTube clips, social media, Google searches on the occult. If you’re looking for the best of these haunts, I have good news: They’re all solid watches. So turn on your favorite background and log in — it’s time to turn your least favorite pastime into a freaky and fun movie night.

Seance rule #1: Keep the circle closed.
Seance rule #2: Make everybody a co-host in case someone gets possessed.

In Host (2020), a group of friends hold a Zoom seance. Amateurs, they are about as giddy as you’d expect. The girls invite a bit too much in their chanting, and uninvite way too little. Something leaks into the world.

Whether you poll critics or audiences, Host is the undisputed champion of both Zoom and quar-horror. A ghost slasher, the film finds exponentially creative uses of the format and paces your heartbeat in ascension. The taut final product is a race to the finish line, and there’s enough left rugged and unpaved along the way to bounce you like a rally race. It’s the best movie on the list, and there’s a bonus: the full experience clocks in at under an hour.

This movie shouldn’t exist. 18 years before Host (2020), an inexpensive little film called The Collingsworth Story (2002) plugged in a few webcams and built a small world. Hometown couple Rebecca and John are separated by an eight-hour drive — Rebecca at college, and John at the local body shop. 56k phone modems are their only connection. Unrealistically clear video signals mark the small suspension of disbelief required to take the movie seriously on its own terms. Several phone calls to a psychic and one early internet-research scene later, our heroes find themselves tip-toeing through Wiccan symbols and dust only a few degrees shy of the dried mud aging the cabin at the end of The Blair Witch Project (1999).

Watching The Collingsworth Story is like reading Nostradamus: you’re not entirely sure whether what you’re seeing was a kind of conscious prediction, or just accident and entropy. Collingsworth‘s not scary, but it is eerily bare in a creepy, AOL way — just unsettling and believable enough to keep you dialed in for its lean runtime. The blanketing, spare Windows 95 scenes call to mind the other special effects that, cheap or undercooked, accidentally fit the movie better than the more expensive versions would have — think Jaws (1975) and the necessarily shadowed CGI T-rex in Jurassic Park (1993). Here, an artifact only one layer of sediment away from Napster and Kazaa may mark one of your most unique and memorable watches.

Unfriended follows a group of teenagers who are hacked by a ghost during a video call. Clock ticking, the teens play detective to understand what exactly is happening and how to stop it. Every single thing this movie tries works — which, given a gimmicky conceit, could have gone quite differently. The movie finds a way to introduce something new into its formula every ten minutes or so, leading to payoff after payoff. An unapologetic warning, with a title that serves at once as four or five puns, Unfriended is surprisingly exceptional and more than worth the 82-minute runtime.

Unfriended’s sequel Dark Web is appropriately darker than the first installment. Cousin to Nick Cage’s 8MM on one side of the family and The Counselor on the other, Dark Web once again finds several friends on FaceTime coping with an unruly, creepy hacker. On one of their laptops are disturbing videos they shouldn’t have access to, and their curiosity and good-samaritanism lead them into a world of hurt — ruled, they find, by those who know best how to hurt. Produced by horror hero Jason Blum and Unfriended returner Timur Bekmambetov, Dark Web knows how to work within its digital framing instead of around it. The movie is a creative descendent of alternative narrative forms like the letter-heavy “epistolary,” and it’s more than capable of serving up unexpected thrills.

Safer at Home (2020) eerily predated our “variant of the month” lifestyle. Its premise: the coronavirus pandemic has worsened significantly, variants sending the world back into quarantine, and a group of friends hop onto a Zoom and take what they think is ecstasy, together. Safer at Home is the least successful movie on the list, but a must-see for die-hards. It’s an anxious movie with naturalistic performances — a major advantage of the found-footage subgenre as a default. Ingroup fighting and finger-pointing take up the middle third of the movie, true-to-life ratios of actual quarantine. If you can scale the somewhat awkward setup, Safer at Home delivers enough familiar terrors from pandemic life to feed dreadful catharsis.